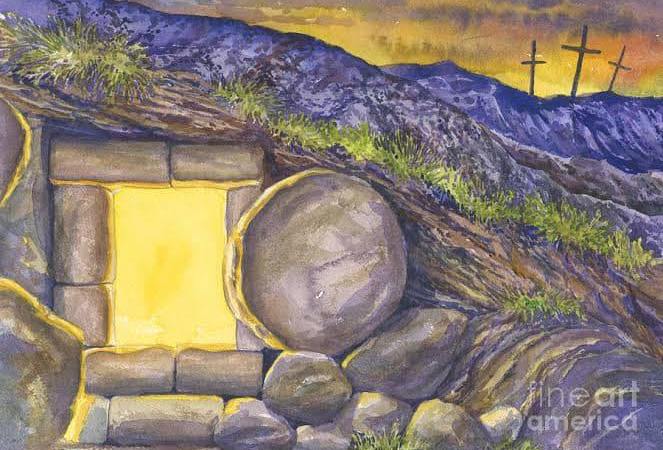 One of the most striking things about Luke’s first resurrection account is that absence of the resurrection. The resurrected Jesus does not appear until v. 15 and is not recognised until v. 31. The first 12 verses, the focus is on the tomb, Luke wants us to understand the empty tomb before we consider the risen Christ.

As the women go to the tomb, that first Easter morning, they find the tomb empty (v. 3) and they are greeted by two angels who pose a penetrating question:

Although it is hardly a rebuke, it does suggest that the natural assumption should be that Jesus’ is alive, and not that he is among the dead. Three day’s after the cross, the angels suggests the tomb should not be the place to go. After all, Jesus had explained such:

“…He is not here; he has risen! Remember how he told you, while he was still with you in Galilee: ‘The Son of Man must be delivered over to the hands of sinners, be crucified and on the third day be raised again.’ ” Then they remembered his words. (vv. 6-7)

Jesus had told his disciples what to expect, yes the crucifixion, but then the resurrection on the third day. But this is more than a lesson in listening, it is a lesson in understanding.

We live in a world where death reigns, that has been the case since Adam, and it has only been brought closer to home by our current crisis. For us, we expect every life to end with death, we expect every grave to be full in the end. However, we have become too used to something that should never have been, God did not create man for death but for life.

Remember on the cross, Jesus’ promise to the thief? The expectation of the kingdom that that man and Joseph of Arithmetha shared? That death was not the end. Jesus’ death, was the death of death, the price was paid, that those who trust in Christ might. not die but have eternal life. Jesus’ death, meant that death would not be the end, life would be. And surely we should expect that to begin with the king himself. If his death conquered death, how could he be held by death. Surely he couldn’t be, surely you won’t find the living among the dead.

Today on the news, you will be able to find the death figures, and they will be rising. They always rise even without a contagious virus. But this Easter Day, won’t you count the life figures? On the first Easter Day it was one, as the king who defeated death lived, but the life figures go up and up. As all those who trust him can have the confidence that, though they die, they will live. And every person, who like the thief on the cross, trust in Christ as their saviour, they will be added to the life figures. Their story, as with their king, will end not in death but in life. On the last day, they will be raised with him. On the last day, thousands, hundreds of thousands, millions will be found not among the dead but among the living.

In a world, gripped by the fear of death, finding the tomb empty, reminds us that so many graves, including yours if you trust in him, will one day be empty. It will end in life!

Almighty God, through your only Son Jesus Christ you have conquered death and opened to us the gate of everlasting life: by your grace put good desires into our minds and, in your mercy, help us to bring them to their fulfilment, through Jesus Christ our Lord, who lives and reigns with you and the Holy Spirit, one God, for ever and ever. Amen