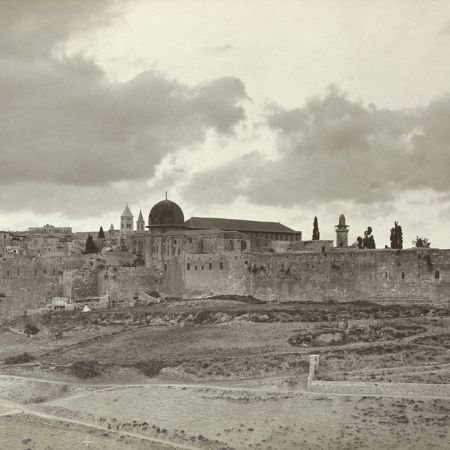 What does the future hold? I guess many of us are asking that at this time. The future seems far from certain. As Jesus approaches the cross, for his disciples, though they may be less aware of it, the future is equally uncertain.

In vv. 5-37, Jesus speaks of two future events, one which points to the other. The first is the destruction of the temple:

“As for what you see here, the time will come when not one stone will be left on another; every one of them will be thrown down.” (v. 6)

The destruction of the Temple and the siege of Jerusalem will be a terrible time. It will be time to flee and weep, as Gentiles trample the city. With Jesus’ resurrection comes the end of the special place that Jerusalem and Israel held in the purposes of God. As the Jews reject Jesus, so they will be rejected. This does mean that Jews will not be Christians, the early church was predominately Jewish, but the Jews will be brought into a people of God made up of many nations.

The destruction of the Temple, happened, in AD. 70, when the Roman’s entered Jerusalem, but it points forward to a greater judgement:

“…At that time they will see the Son of Man coming in a cloud with power and great glory. When these things begin to take place, stand up and lift up your heads, because your redemption is drawing near.” (vv. 27-28)

Jesus’ teaching of the second coming, often has the focus of being ready, but here the application seems to be one of perseverance. The disciples will be arrested and persecuted, even before the fall of the temple (vv. 12-17). They are to endure, to continue by trusting in God’s care protection:

Everyone will hate you because of me. but not a hair of your head will perish. Stand firm, and you will win life. (vv. 17-19)

For those of us living after AD. 70, we await a similar yet bigger end:

“There will be signs in the sun, moon and stars. On the earth, nations will be in anguish and perplexity at the roaring and tossing of the sea. People will faint from terror, apprehensive of what is coming on the world, for the heavenly bodies will be shaken…” (vv. 25-26)

You don’t have to go far, to find those who would say these current events are signs that the end is nigh. After all, are we not in a time of pestilence (v. 10)? And yet people have been through this before, and no doubt will do again. Part of Jesus’ point here, is not that these things will show us when the end is near, but simply what will mark the time in which we wait.

The point is not that we seek to discern what we cannot know, the times and places of his return, but that we persevere, and greet the end with eager expectation:

“…When these things begin to take place, stand up and lift up your heads, because your redemption is drawing near.” (v. 27)

What does this mean?

“Be careful, or your hearts will be weighed down with carousing, drunkenness and the anxieties of life, and that day will close on you suddenly like a trap…” (v. 34)

It is no accident that these verses come before Jesus’ final sacrifice. Jesus death redeems his people to live and serve him, to wait for the end as we live in godly obedience.

Merciful Father, whose Son endured the cross that we would not face the condemnation which we deserve, Grant us patient endurance, that we might not be weighed down sin, but ready for your return. In Jesus’ name, Amen